Kilobush is a stretch tent rental company based in the Hamptons, New York, USA.

We are a team of experienced stretch tent riggers and stylers.

Each of our tented event installations is a unique creation, adapted to the space and needs of our customers.

When renting a Kilobush stretch tent, you get so much more than a tent… 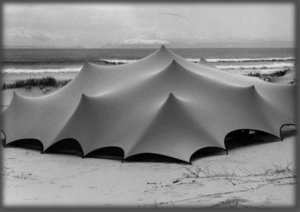 Kilobush (Africa) was founded in the mid nineties as a film support service company based in Cape Town, Southern Africa.

In 1996 we conceived and developed what we termed a ‘freeform bedouin tent’ for the 20th Century Fox movie “Hoofbeats” set in the Namibian desert.The brief was to produce a large camouflage tent for the caterers. It was to be light, flexible in form, easy to rig and strike so it could be wrapped up and moved at a moments notice to different sites. Most of all it had to be robust enough to withstand the ferocious desert winds of the Namib.

Today through our partnerships and worldwide associations, Kilobush is at the forefront of stretch tent technology and imagination.